Ringo Sheena appears in the Trending list in Youtube regularly. In today’s music video, avantgarde dancer Aya Sato in three forms parades in the night of Tokyo. From any angle, this is no ordinary video.

Gate of Living-Ringo Sheena, who looks down the the human world from the clock tower of Ginza Wako 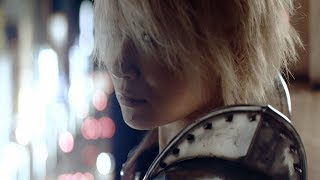 “Gate of Living” is the first tune in “San-doku-shi,” her original album for five years. The devastatingly remarkable video is created by popular video director Yuichi Kodama, Ringo virtually married.

The video starts with “the Heart Sutra” by a Buddhist monk. Every form in reality is empty, and emptiness is the true form. This world is ever changing. Sic transit gloria mundi. Yes, "Essays in Idleness" (a famous Japanese essay written by a Yoshida-Kenko in 14C). Noooo, that’s the song of Soshi Sakiyama! “I can’t handle this♪” So this is the beginning of the theater Ringo and Aya. The Tokyo Olympic and Paralympic Games in 2020 is just around the corner.

Three types of Aya Sato represent the three poisonous earthly desires, which are greed, complaint, and anger (left to right). The dance by these Aya deities is breathtaking. At the same time, Ringo who looks down the poor, foolish humans from Ginza Wako clock tower looks great with a sense of impermanence. I love the gorgeous concettism full of poignant sarcasm of this music video. That’s exactly the Ringo style.

Does Shinjuku have an “Eye”?

”Shinjuku-no-me (The Eye of Shinjuku)” appears frequently in this video. It’s an art monument located in the underground of the Subaru Building in the West exit of Shinjuku Station in Tokyo.
It was created by sculptor Yoshiko Miyashita in 1969. The art monument is approximately 3.4 meters (11 feet) high and 10 meters (33 feet) wide. It has lights inside and the the apple of the eye spins.
Wow! It’s shines and spins? I never know such a trick!
Oh, you can see the sparking, rotating it at 2:55. I thought that was the effect by Adobe software.

Genki Sudo shot with the Eye of Shinujuku.

The Eye also appears in in the animation of Eve.

The end of lovable “The Eye of Shinjuku”?

Last year, the dismantlement of Subaru Building was announced. Then, where does the Eye go? Some say it will be scrapped. I’m not sure about the schedule of the dismantlement but the monument still exists this month because I met my friend there. That’s a very good meeting place near Shinjuku station, which is so confusing even for me living in Tokyo.

Such large public artworks, which were housed anywhere throughout the cities in Japan, need to be determined where to go in times of redevelopment. “The Eye of Shinjuku” is loved by people, but that’s not always the case. Sometimes, redevelopment project is a chance to say goodbye to poor, ugly artworks.

The era of 5G with a 100-time data transmission speed is coming. I think that “The Eye of Shinjuku” can reborn to be a virtual one. Anything that has a fixed form will be destroyed. Every form in reality is empty. ”This world is ever changing. Everyone knows that♪”

“The Eye of Shinjuku” has been watching people who are driven by three poisonous earthly desires. We appreciate it.

« Spirits of the Sea-Kenshi Yonezu Hits L… Genki Sudo WORLD ORDER "WE ARE ALL ONE"… »
検索
Author: tokyocabin